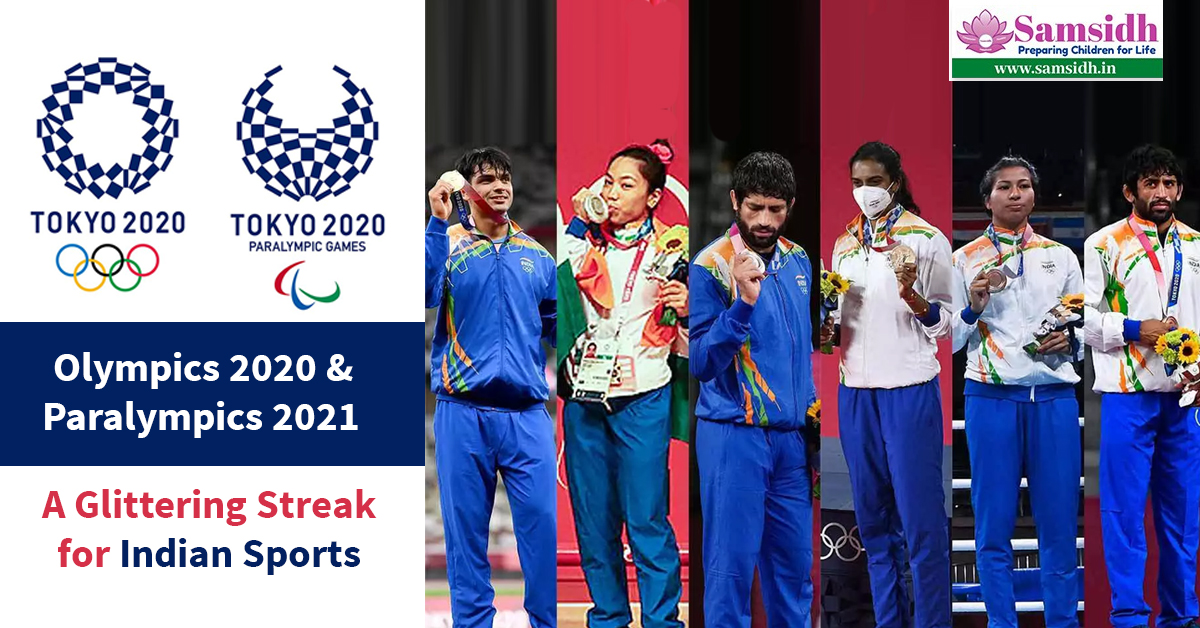 Olympics 2020 and Paralympics 2021: A Glittering Streak for Indian Sports

Home » Olympics 2020 and Paralympics 2021: A Glittering Streak for Indian Sports

Despite being postponed a year amidst the gloom of Coronavirus, Tokyo Olympics 2020 and Paralympics 2021 gave us enough reasons to raise a toast for the Indian athletes who added feathers to the country’s cap with their stellar performances. Both the events, hailed as best-ever in the Indian context, in terms of medals haul and performance standards, leave us all inspired and jubilant.

The Shine of gold

India finished 48th in the recently concluded Tokyo Olympics with 7 medals, the highest since 1900, scored by a team of 126 athletes. With nail-biting finishes aplenty, some near-misses, and heartbreaks, Olympics 2020 will remain memorable for Indians for the first-ever track-and-field gold, brought home by Javelin-thrower Neeraj Chopra. India’s first individual gold in Olympics came with Abhinav Bindra in the Rifle shooting event in 2008 followed by Chopra’s in the recent edition. Hailing from a modest farming family, Neeraj entry into sports was driven by the humble goal of losing a few inches. But as fate would have it, he reached a remarkable milestone with promises for more in the future.

The Rest of the Medals Tally

This edition of the games also ended the long drought of medals in Hockey for India with a bronze by the Indian Men’s Hockey team. In a closely contested playoff for bronze with England, the Indian Women’s Hockey team too gave its best-ever performance to finish fourth valiantly against England. Worthwhile to mention here that India’s last medal in hockey was won in the 1980 Moscow Olympics. India had a dream run in Hockey in consecutive editions of the Olympics with the rise of legendary players like Dhyan Chand in 1928 – 1932 – 1936, and Balbir Singh Sr. in 1948 – 1952 – 1956, when the world acknowledged the Indian side’s prowess as a formidable contender in the team event.

Mirabai Chanu grabbed silver in weightlifting, right on the opening day of the games, raising the hopes of Indians and the bars high. Wrestlers Ravi Kumar Dahiya and BajrangPunia won a silver and a bronze respectively. A bronze each was added to India’s medal tally by pro shuttler P.V. Sindhu and young boxer LovelinaBorgohain.

Golfer Aditi Ashok and wrestler Deepak Punia were the other notable performances this Olympics that failed to fetch a coveted medal. Aditi, the first Indian woman golfer, finished her campaign at the fourth position, up from the 41st position in the 2016 Rio Olympics. Wrestler Deepak too missed the podium finish by a whisker, conceding takedown in the final 10 seconds of the bronze play-off.

The Grand Show At Paralympics 2021

If the Tokyo Olympics was a sporting high for India, the Paralympics that followed soon after in the same venue turned the heat higher with 19 medals filling the basket. The recent edition of the games is considered the best show put up by our differently-abled athletes to date since India started participating in the games in 1968.

Shooter AvaniLekhara clinched gold in Rifle Shooting, earning the ‘first Indian women and shooter to win gold’ tag. She followed up with a bronze in another shooting category.

Besides Avani, shooters Manish Narwal won gold while SinghrajAdhana picked up a silver and a bronze. The Paralympics Shooting team’s grand 5-medal show nullified the poor performance of their counterpart in the Tokyo Olympics 2020.

Another first in the Paralympics 2020 was Harvinder Singh’s feat to win the first-ever medal in archery. Table tennis player Bhavinaben Patel too created history by winning silver in her maiden game.

The unfortunate stripping off discus thrower Vinod Kumar’s bronze medal on the grounds of ineligibility will be regarded as a black spot in the glorious history of Tokyo Paralympics 2020.

The success stories of the Indian contingent reiterate the Olympic spirit of building a peaceful world by educating youth through sports, playing fair and harmoniously. Sports can indeed contribute to a better world, simply by nurturing a sportsman spirit in each individual that plays a sport. And when it comes to children, sports can imbibe crucial life skills that will help them in every stride they take in the real world.

Overlooking the sorrowful figure of medals won in the 121 years of India’s Olympic journey vis-à-vis its population, we must acknowledge the sheer determination and effort of our sportspersons that have led to this fragmented, yet undeniably hard-earned glory.

Setting a target of a far more sparkling performance on the international podium in the future, at Samsidh Group of Schools, we focus on the holistic development of our wards through sports combined with academics.

At Samsidh, every child is equipped with these skills to be a true Ethical and Happy Leader of 21st Century. Children must also be a Happy Leader in order to be successful.